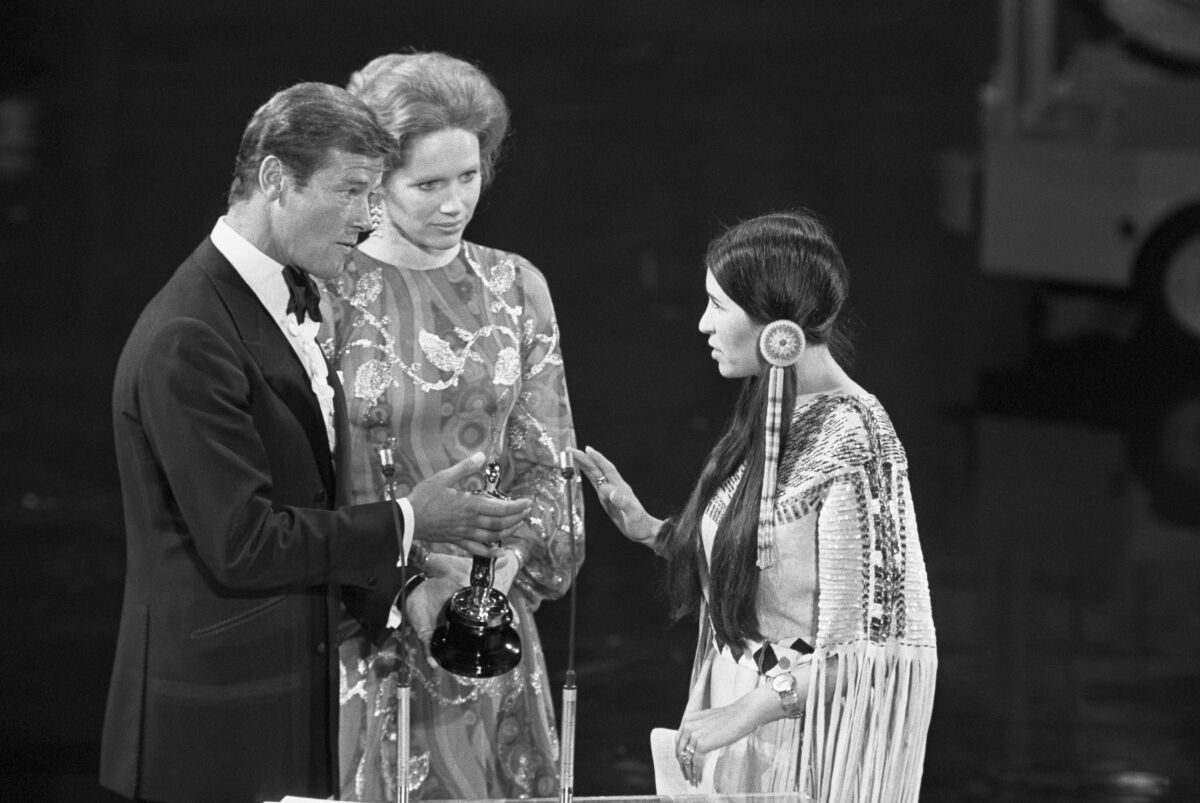 Sacheen Littlefeather, the Native American activist Marlon Brando sent to the 1973 Academy Awards to turn down the Oscar for lead actor he won for “The Godfather,” has died. she was 75

The Academy of Motion Picture Arts and Sciences announced the news on his social media accounts on Sunday night. In an email to The Times, Littlefeather’s family confirmed her death and said she died peacefully, surrounded by her loved ones at her Marin County home.

In one of the most famous moments in Oscar history, Littlefeather took the stage at the Dorothy Chandler Pavilion on March 27, 1973, after Brando’s name was read as the winner. Wearing a fringed buckskin dress and loafers, Littlefeather refused to accept the Oscar offered by host Roger Moore. She strongly expressed Brando’s regrets, explaining that she would not accept the Oscar due to Hollywood’s mistreatment of Native Americans and the showdown at Wounded Knee.

“I pray at this time that I have not intruded on this night and that we will in the future, our hearts and understandings will meet with love and generosity,” Littlefeather said.

As Littlefeather spoke, the audience reacted with a confused mix of applause and jeers. In an interview with the academy this year, Littlefeather recalled seeing actor John Wayne being prevented from going onstage by security guards.

“[Wayne] I didn’t like what he was saying on the podium,” Littlefeather said. “Then he stormed out to physically assault me ​​and kick me off stage. And he had to be held down by six security men to keep that from happening.” (The specific detail of Wayne being held down by half a dozen security guards has it has since been questioned by film scholars.)

In the aftermath of her appearance at the Oscars, Littlefeather continued to generate controversy. Although Native Americans cheered her for standing up for civil rights, false stories soon spread claiming that she was not a true Native American.

Months later, Brando expressed his own misgivings about the position Littlefeather had been put in: “I was distressed that people had booed and whistled and stomped, though maybe it was directed at me,” he told Dick Cavett. “They should have at least had the courtesy to listen to her.”

With few opportunities in Hollywood, Littlefeather soon abandoned any ambitions she had had to forge an acting career and almost completely disappeared from the public eye. Still, her notoriety at the Oscars never completely faded. Years later, comedian Dennis Miller sneered on “The Tonight Show” about then-Senate candidate Elizabeth Warren, who claimed Cherokee ancestry: “She’s as Indian as the stripper Brando sent to pick up her Oscar for ‘The Godfather. .'”

It would take almost 50 years for the academy to officially apologize to Littlefeather, which it did this summer.

In a June letter signed by former Academy president David Rubin, the organization acknowledged that the “abuse” Littlefeather endured in the wake of her onstage statement was “unwarranted and unwarranted.”

“The emotional toll you have experienced and the cost of your own career in our industry are irreparable,” the academy statement said. “For too long the courage you showed has gone unrecognized. For this, we offer our deepest apologies and sincere admiration.”

The academy honored Littlefeather two weeks ago with a night of “conversation, reflection, healing and celebration” during which she spoke with producer and academy member Bird Runningwater, co-chair of the organization’s Indigenous Alliance, and reviewed the night in who turned down Brando’s Oscar.

“I went up there as a proud Indian woman, with dignity, with courage, with grace and with humility,” Littlefeather said, “and when I started up those steps I knew I had to tell the truth.”

Littlefeather added that she appreciated the academy’s gesture, believing it was beyond her and what happened in 1973.

“I am here accepting this apology not only for myself, but as an acknowledgment, knowing that it was not only for me but for all of our nations, who so much need to hear and deserve this apology.” little pen said. “Please, when I am gone, always remember that whenever you stand up for your truth, you will keep my voice and the voices of our nations and our people alive.”

In lieu of flowers, Littlefeather requested that donations be made to the American Indian Children’s Resource Center in Oakland.

Every week, we provide a cartoon that needs a title. You, the reader, submit your caption here, we pick three finalists, and you...
Read more
GAMING

Bruce Willis will continue to act in future projects, in the form of a deepfake

Although Bruce Willis announced that he will be...
Read more

The revolution in lunar exploration | Sciences

The Cardinals wanted to draft Patrick Mahomes, and it would have changed the NFL

There are so many amazing "what ifs?" when it comes to the NFL, but the latest from Bruce Arians would have...
Read more

The Minnesota Vikings (1-0) head to Philadelphia to take on the Eagles (1-0) for the second of two Monday night football games. This...
Read more