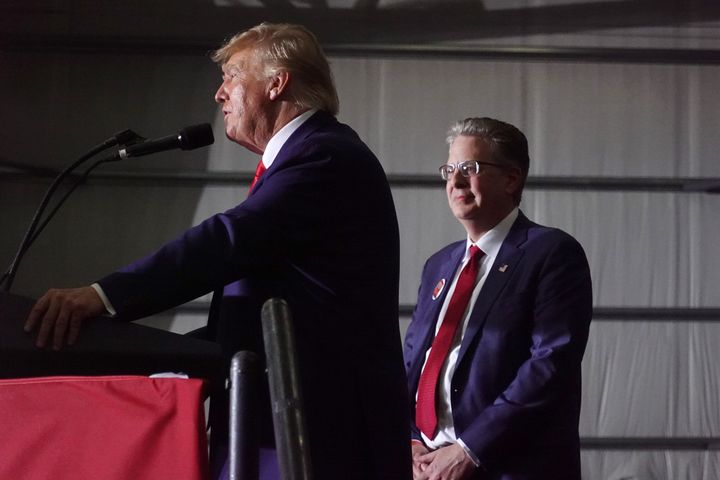 Matthew DePerno, the Republican candidate for attorney general in Michigan who has made a name for himself by spreading lies about the 2020 election — and becoming the target of an investigation into whether he illegally tampered with voting machines — is spending the final stretch of his campaign spouting new falsehoods about alleged election crimes.

In a recent meeting with the editorial board of the Detroit Free Press, DePerno claimed that voting machines in Antrim County, Michigan had been “broken into” in 2020. the newspaper said on Tuesday. hey that said that his opponent in the November 2022 election, Attorney General Dana Nessel (D), had failed to investigate the alleged crime.

“Why don’t you write a story on Dec. Jan 4, 2020, when I mentioned to Dana Nessel a true crime of two tabulators that were actually used in the November 2020 election where the security tapes were removed, the machines were broken into,” DePerno said.

But none of that is true, the Free Press reported.

For one thing, the newspaper found, DePerno never filed any kind of criminal complaint with law enforcement. More importantly, the candidate has yet to offer evidence, not even a detailed description, of the crime he said took place.

His allegations appear to stem from a 2020 civil suit brought by his client Bill Bailey, who claimed that a vote-counting issue on Election Day in County Antrim it was evidence of possible widespread fraud in Michigan. (In fact, it was a simple, quickly resolved human error.) Early unofficial results showed then-President Donald Trump losing the rural, conservative county, but a quick recount indicated he had won by a 61% to 37% margin.

As part of the legal challenge, DePerno claimed that some voting machines in Antrim Country were missing the security tape that is normally placed on them after elections, suggesting they may have been compromised. But the group of inspectors DePerno was involved with hadn’t looked at the machines. until weeks after the election, the Free Press reported, long after the security tape could have been legally deleted.

Still, DePerno claimed that “there is evidence that someone who was not authorized removed the tape … during the election.” He provided no such evidence, according to the Free Press.

He also told the outlet that he believed Nessel knew about the tampering allegations and did nothing to address them.

Both Nessel’s office and the Antrim County Clerk reiterated this week that they believe the claims are unsubstantiated.

The demand has gone nowhere. An appellate court panel found in April that the “plaintiff simply raised a series of questions about the election without making specific factual allegations as required.”

In a statement to HuffPost, DePerno’s campaign declined to comment further on the allegations or the lawsuit. “We are done repeating the County Antrim case,” a spokesperson wrote.

‘They are domestic terrorists’

DePerno’s claim about tampering with voting machines actually echoes an investigation into his own self Alleged Actions: Nessel’s office has said that DePerno was one of the “primary instigators” of what described as a possible “conspiracy to illegally gain access to voting machines used in the 2020 General Election.”

At the bureau’s request, a special prosecutor is currently investigating DePerno and right-wing operatives who say the bureau attempted to access and breach the machines as part of its attempt to push voter fraud myths.

DePerno and others, including far-right Barry County Sheriff Dar Leaf, allegedly managed to put your hands on some machines during this effort. Leaf also sent a sheriff’s deputy and a private investigator. from town to townpressuring employees for information.

According to Nessel’s officeThe group then took the machines to “hotels and/or AIRBNBs in Oakland County” so they could access them and run “tests” on the equipment.

it’s a crime in Michigan to “get and possess” of voting equipment.

DePerno has previously called the state investigation a “witch hunt,” and promises in his campaign place to “prosecute the people who corrupted the 2020 election and allowed fraud to permeate the entire electoral system.”

DePerno’s efforts have been a source of widespread lies about the 2020 election.

Former Overstock.com CEO Patrick Byrne, a key financial backer in the effort to cast doubt on the 2020 results, sent a team to investigate the machines in County Antrim and wrote a report claiming that the machines in Dominion brand voting in the area were “intentionally and deliberately designed with inherent flaws to create systemic fraud and influence election results.”

This report has been repeatedly discreditedbut was still quoted in a draft executive order in 2020 claiming that Trump, who was still president at the time, had the authority to seize voting machines across the country.

“It is not a question. … It’s all rigged,” Byrne, now one of several people facing a defamation lawsuit Of domain, said in a video this month.

Byrne then called out Nessel, Michigan Secretary of State Jocelyn Benson (D) and Jonathan Brater, director of the Michigan Elections Office: “They are domestic terrorists. I’m saying it. Sue me.”

Everyone is very confused...
Read more

The revival of ‘Fletch’ with Jon Hamm premieres trailer